See Aisha Buhari’s advice to wife’s of governor’s and chairmen in Borno. 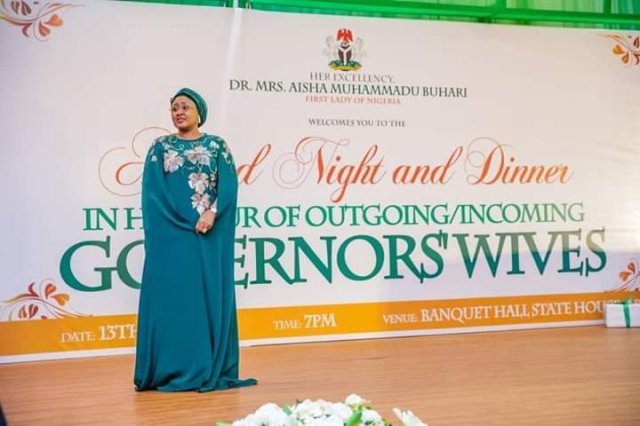 Aisha Buhari has said she is interested in her husband’s success barely two weeks after she had criticized some appointments in his govt – The wife of the president advises wives of political leaders, governors, legislators, local government chairmen and counselors to work closely with their husbands – She thanks her husband for fulfilling his campaign promise to resettle displaced victims of Boko Haram insurgency Aisha Buhari, wife of the president, has said she is interested in her husband’s success barely two weeks after she criticized the appointments of some persons in his government, The Sun reports. Mrs. Buhari made this known on Wednesday, October 26, at Beneshiek, headquarters of Kaga Local Government in Borno state, in what looks like a subtle response to the heat generated by her interview to BBC and her husband response that “she belong to the kitchen, living room, and other room.” READ ALSO: Group compares Buhari to Trump over comment against Aisha According to her, her interests lie in the success of President Buhari’s government. “What I am after in particular is the success of my husband’s administration and he can’t do it alone except with the help of the governors, their wives and all members of our progressive party,” she declared at the flag off of nutritional foods and household utensils to Internally displaced persons who recently returned to their communities. The wife of the president also advised the women.

She said: “We thank Almighty Allah that we have started fulfilling some of the campaign promises that we made. This is the essence of leadership; you make a promise and then fulfilled it. We thank my dear husband who makes sure peace is returned to the northeast states.”